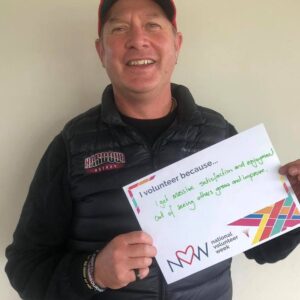 With great sadness, we can now share with you that last week the North Harbour Hockey Association Board received the resignation of our CEO, Riki Burgess. Having just celebrated his 10th anniversary with us, the news did come as a bit of a surprise! Riki has become part of the woodwork at North Harbour Hockey, a steady hand who has guided our sport and people so well.
Riki first came to North Harbour Hockey from Harbour Sport in 2011 and immediately began adding his leadership style. At the same time, while he may refer to being from “the mighty North” it quickly became evident to our Harbour Whanau the importance he placed on creating a family-friendly and safe environment. Riki’s enthusiasm for our people has seen our Association become the envy of many.
Never being one to shy away from a conversation about what is best for our sport and our people, he was quick to change the youth space to grow participation. His leadership saw NHHA replace the Primary Representative Programme with inclusive development programmes that increased our youth’s access to our sport. This change was a crucial driver in the rapid growth in playing numbers from 2012 and has continued through all grades and age groups.
While his dress sense reflects his Northland nature, it is impossible to question the passion he has for our game. A well-known weekend warrior for ABC club, who collected his fair share of cards for some time, it would be hard not to appreciate his competitive nature and his body-on-the-line commitment to his team on the field. The same can be said off the field too, a leader capable of striking the balance of the performance expectations required to drive our sport forward while ensuring suitable time to share a hockey-related memory or two.
Riki’s ability to create relationships with key people involved in sport and our community has been called on many times to see North Harbour Hockey go from strength to strength. Early on in his tenure, his ‘she’ll be right’ approach allowed him to muster up over 130 volunteers to deliver the first-ever Champions Trophy held in New Zealand, allowing our Black Sticks Men to compete at the very highest level in front of a home crowd. Our community painted, water blasted, and cleaned our facility from top to bottom and could not have been prouder with the international hockey spectacle that Riki’s leadership made happen.
He has supported many of our representative teams, schools, and clubs over the years, and anyone who has had the pleasure of playing under him will tell you about the importance he places on culture. Whether in the workplace or outside of the office, he has a knack for empowering, connecting, and growing people. Riki has led our North Harbour Hockey staff with a level of dignity and class that our Board commends him for.
As the migration to the new facility came to life, Riki was heavily involved in the project development, build and then the relocation to our new home at the National Hockey Centre. He was vocal throughout the planning, design, and build process to ensure that all the things that “were North Harbour” made their way across to our new Bush Road home. Although very long and challenging, the process was guided by Riki’s steady hand and confidence in the outcome being the right one for our community.
In recent years Riki, more commonly known as ‘Big Guy’ around the community, has enjoyed the challenge of being connected to our Challenge Shield-winning Harbour Wolves. That said, Riki gets just as much out of coaching a hockey match, filling in as an in-school deliverer, helping a child drown their chips in tomato sauce, or high-fiving a junior umpire as he does a tournament winning result. A leader of our people and one who firmly believes in the important role that sport plays at all ages and stages of an individual’s holistic development.
The Board has started to lay down a process for recruitment and will communicate this in due course. Although there will be a more formal celebration in the future, the Board would like to take this opportunity to thank Riki and his family for all they have committed in the past ten years.
Riki is excited about the future change in his role at North Harbour Hockey and has confirmed he will be the first member to sign up for the Supporters Division. A quality individual with admirable values, we know with full confidence that he will be a member of our Harbour Whanau for life.
Riki’s last day will be Sept 10th, and further information related to recruitment will follow shortly.
Kind regards,
Bronwyn Coomer-Smit & Larry Stenberg, Co-chairs of North Harbour Hockey Association Board