The Pakistan Trophy is awarded to individuals who have made an outstanding contribution to the administration of hockey in the previous 12 months.

Due to COVID 19, the 2020 Hockey NZ Awards did not eventuate, and so the Pakistan Trophy recipient announcement was delayed 12months to ensure they were recognised in front of their pairs.

It was hard to sit on this secrete in such a tight community, however, we pulled it off as Sharon Williamson, North Harbour Hockey Legend and Life Member, was the 2020 recipient and acknowledged last Fridays 2021 Hockey New Zealand’s Awards.

Sharon was the driving force behind the delivery of our new premier hockey venue – the National Hockey Centre.

She volunteered thousands of hours of her time across seven years to ensure this world-class facility opened in time for the first 2020 FIH Hockey Pro League matches.

Sharon has had a lifelong involvement in hockey, and more specifically in North Harbour Hockey through many roles, but it is her leadership of the new National Hockey Centre in Albany that she was recognised for in the receiving of the Pakistan Trophy.

As Chair of the centre’s Governance Group, many have commented that the centre would not be a reality today without her input, drive and commitment.

Building and maintaining relationships is where Sharon comes into her own, and the strength of the many complex relationships within this project ensured some incredibly tight timeframes were able to be met.

Sharon’s involvement with North Harbour Hockey is wider than just the National Hockey Centre project. It has included a lifetime as a player, coach, manager, donor, acting Chief Executive, Board member and Harbour Hockey Charitable Trustee.

Congratulations and thank you 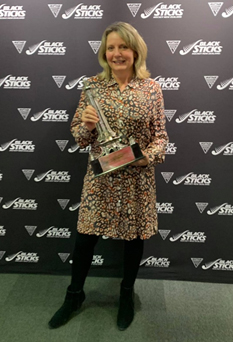